4 policemen sentenced to death for kidnap, murder charges in Kandahar 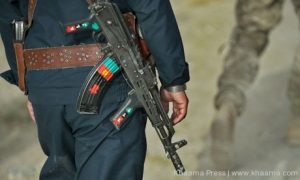 A court in southern Kandahar province of Afghanistan sentenced four policemen to death for kidnap and murder of three people.

The policemen had reportedly kidnapped three people in Shahwali Kot district and killed the abducted individuals after receiving money from their families.

In the meantime, the convicted policemen rejected their role behind the incident and said the three individuals were abducted and killed by Taliban militants.

However, the families of the deceased individuals said they have paid one hundred thousand Afghanis to the convicted policemen for the release of their relatives but they later received their dead bodies.

The appeal court in Kandahar province awarded death sentence to all four convicts after reviewing the case and evidences presented to the court.

According to reports, the deceased individuals had gathered in a picnic when they were abducted by policemen belonging to Sar-e-Band police check post in Shahwali Kot district.