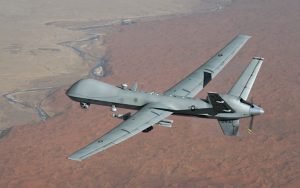 At least four militants affiliated with the Islamic State of Iraq and Syria (ISIS) terrorist group were killed in a drone strike in eastern Nangarhar province of Afghanistan.

According to the local government officials, the militants were targeted in a drone strike in Achin district earlier today.

He said the raid was conducted in Chaparhar district of Nangarhar province, leaving 3 militants dead, including a commander of the militant group.

This comes as the US Air Force has reportedly dropped 251 bombs and missiles targeting mainly the loyalists of the Islamic State of Iraq and Syria (ISIS) terrorist group in Afghanistan during the months of January and February.

According to the data compiled by the Air Force, the airstrikes in the first two months of the year was more than three times the strikes in the same period last year.

The increase in airstrikes followed by President Barack Obama’s grant of authority to launch attacks on Islamic State militants who had gained control over territory in several provinces, including areas in the Tora Bora region, where Osama bin Laden once took refuge.