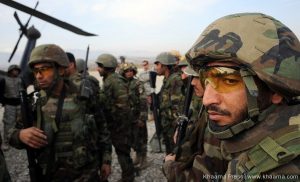 At least 111 Taliban militants were killed during military operations in various provinces of Afghanistan in the past 24 hours.

He did not disclose further information regarding the exact locations of the incident where the Afghan soldiers were martyred.

In the meantime, Azimi said the anti-government armed militants have increased to their insurgency activities and carried out attacks in 21 provinces in the last 48 hours.

He said the anti-government suffered heavy casualties after the Afghan security forces responded to their offensive.