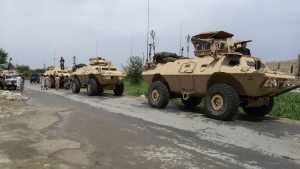 At least 37 ISIS militants were killed and 44 others were wounded during the ongoing operations in eastern Nangarhar province of Afghanistan.

The Ministry of Defense (MoD) said the operations are being conducted as part of Shaheen-18 in Kot district.

MoD further added that the militants were killed or wounded during the airstrikes and artillery raids on ISIS positions.

The operations in Kot district are being conducted as the loyalists of the terror group launched a major attack on police check posts earlier in Friday.

Dozens of people including policemen and civilians were killed in the attack as well as 131 ISIS loyalists during the clashes.

The major attack by ISIS loyalists on police check posts followed as the Afghan and US forces stepped up raids against the terror group in Nangarhar province.