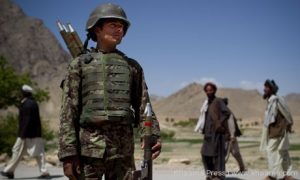 At least 36 Taliban militants were killed in joint Afghan and NATO forces operations across the country, according to the interior ministry of Afghanistan.

The militants were killed during joint military operations during the past 24 hours, interior ministry media office said following a statement.

The source further added that the operations were conducted in Helmand, Paktiya, Maidan Wardak, Kandahar, Baghlan and Kunar provinces of Afghanistan.

The interior ministry also added that 18 militants were also injured and 15 others were detained during the joint military operations conducted by Afghan police in cooperation with the Afghan army, Afghan intelligence and coalition security forces.