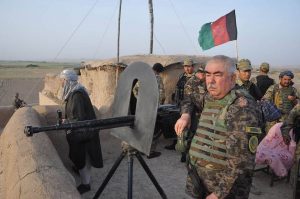 At least 35 militants were killed and 15 others were wounded in the latest clearance operations led by Vice President General Abdul Rashid Dostum.

The Office of the First Vice President in a statement said the main highway connecting Sherbarghan with Sar-e-Pul province was opened during the operations.

The statement further added that 40 villages were cleared as a result of the operations which are lying along the highway.

The operations were launched early on Monday morning with the Afghan Air Force providing close-air support to the Afghan security forces.

The highway was considered as one of the volatile highways in the north ahead of the operations, the statement said, adding that the militant groups and criminal gangs were involved in destructive activities, robberies and kidnappings on the highway.

Vice President Dostum said security posts will be established in the highway similar as the other regions cleared of the militants in a bid to prevent the return of terrorists in the area.

He said the Taliban group has suffered heavy loss and has been defeated in the battle ground as the Afghan forces continue to chase the remaining militants hiding in their safe havens.

The statement by the office of the Vice President said the local residents did not suffer any casualties during the operations.