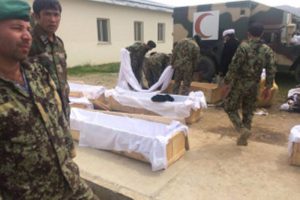 Officials at the Ministry of Defense say that 33 soldiers from Afghan National Army have embraced martyrdom, sustained injuries and missing during a clash with Taliban insurgents in Badakhshan province.

A statement issued Monday by the Ministry of Defense states that about 200 Taliban militants attacked security check posts in Dahan Aab Khastak area Jarom District around 04:30 AM Friday.

The statement adds that the fighting between security forces and Taliban continued for about five hours during which 20 militants including six foreign insurgents were killed and 17 others were wounded.

According to the statement 33 soldiers from Afghan National Army have also embraced martyrdom, sustained injuries and missing during the clash.

Although the statement has not separated the number of soldiers martyred, wounded and missing but Ahmad Naweek Firotan, spokesman for the governor of Badakhshan province says that 18 soldiers have embraced martyrdom during the fighting.

Ministry of Defense statement rejects the reports published earlier which suggested higher lose to the military.

Abdul Rawouf Inami, an Afghan MP, who is originally from Badakhshan province expressed concern over the current situation in the country and told a parliament session on Monday that 28 soldiers were beheaded, 14 wounded and 30 others are missing after Jarom clash.

He further said that Taliban have also seized 11 military vehicles and 79 weapons during the clash.

Zekria Sawda, another Member of Parliament from Badakhshan province while talking to Khaama Press had also reported a higher lose to the government forces during Jarom clash.