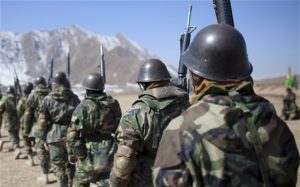 At least 33 service members of the Afghan National Army (ANA) were martyred, wounded or kidnapped following an attack by the Taliban militants in northeastern Badakhshan province.

Gen. Zahir Azimi, spokesman for the Ministry of Defense (MoD), confirmed that 33 soldiers of the Afghan National Army (ANA) were martyred, wounded or kidnapped in the attack.

He said at least 20 militants were killed and 7 others were injured during the clashes with the Afghan security forces.

Gen. Azimi further added that a foreign militant commander was also among those killed during the clashes.

In the meantime, another military official, said at least 14 Afghan National Army (ANA) soldiers were kidnapped by the Taliban militants.

The official speaking on the condition of anonymity said the militants have so far beheaded four of the hostages.

The coordinated attack by the Taliban militants was launched late on Friday night in Jurm district which lasted for several hours.