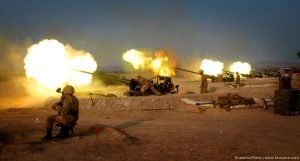 The Pakistan military fired 32 more rockets in eastern Kunar province of Afghanistan in the latest wave of cross-border shelling.

Gen. Syed Khel confirmed that the shelling did not incur any casualties to the local resident; however, he expressed concerns that the government has not taken any step to halt the shelling.

The Pakistani military has been shelling eastern Kunar and other provinces located near the Durand Line during the recent years which has left dozens of people dead or injured.

Pakistan carried out an airstrike in Kunar province earlier late last month which sparked furor among the Afghan officials, while Pakistani jet aircrafts violated the airspace of Afghanistan last week.