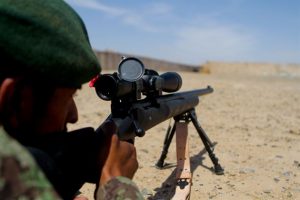 Around 300 US Marines are preparing for deployment to the restive southern Helmand province of Afghanistan in a bid to train the Afghan forces at the battalion-level, it has been reported.

The US Marines will also advise and assist the Afghan forces at the brigade and division level.

The training will include marksmanship, indirect fire and small-unit tactics.

Maj. Kendra N. Motz, spokeswoman for the task force, quoted by The Marine Corps Times, said the roughly 300 Marines will make up Task Force Southwest, and will train Afghans at the battalion-level while advising and assisting at the brigade and division level.

Motz further added “As they train at Camp Lejeune, North Carolina, ahead of their deployment, the Marines are familiarizing themselves with Russian-made weapons, including the AK-47, PKM, DShK and RPG-7.”

“Make no mistake: Though we are no longer in a combat role in Afghanistan, it is still a combat environment,” Reid said. “As Marines, we train and deploy with a combat mindset.”