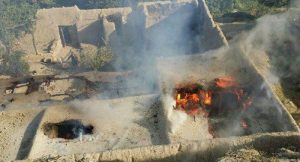 At least 30 militants fighting for the Islamic State of Iraq and Syria (ISIS) terrorist group were killed during clashes in eastern Nangarhar province.

The incident took place in the early hours of Friday morning in the restive Kot district after the ISIS loyalists launched a coordinated attack on police check posts.

According to the local officials, at least 15 civilians were also wounded during the clashes and were shifted to the nearest hospital for treatment.

The officials further added that the ISIS loyalists launched the attack on the check posts of the Afghan Local Police (ALP) forces.

There are also reports of atrocities committed by the ISIS loyalists against the local residents, including beheading and kidnapping of women.

Provincial governor’s spokesman Ataullah Khogyani however said at least 3 civilians were killed and 12 others were wounded, including children.

This is the first time the loyalists of the terror group have launched coordinated attack on ALP check posts in Nangarhar after several months when they faced major setbacks due to ongoing operations.

In the meantime, the US forces stepped up airstrikes against the ISIS loyalists earlier this year after they were granted more authorities by President Barack Obama.