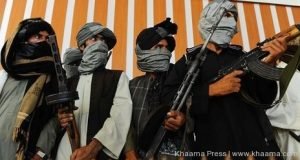 At least three Taliban militants were killed and two others were injured during military operations by Afghan national security forces.

The interior ministry of Afghanistan following a statement, said the operations were conducted during the past 24 hours in Nangarhar, Laghman, Kandahar, Zabul, Ghazni and Helmand provinces of Afghanistan.

Interior ministry confirmed that 3 Taliban militants were killed, 2 militants were injured and 23 others were arrested during the operations conducted by Afghan police, Afghan army and Afghan intelligence – National Directorate of Security (NDS) operatives.

The statement by interior ministry further added that Afghan security forces discovered and seized weapons and explosives during the military operations.

Taliban militants group has not commented regarding the reports so far.