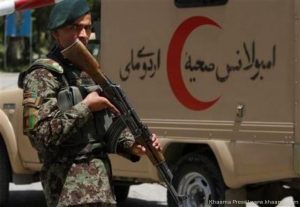 At least three soldiers of the Afghan National Army (ANA) forces and two civilians were wounded in an explosion in Herat city located in western part of Afghanistan.

According to the local officials, the incident took place in Chawk-e-Gulha area of the city late on Tuesday afternoon.

The officials further added that a magnetic bomb planted in an army vehicle was detonated in the area, leaving 3 soldiers and two civilians wounded.

An official in the provincial hospital confirmed they received 3 soldiers and 2 civilians including a young boy from the site of the blast.

He said the health condition of the wounded soldiers and civilians is satisfactory and are undergoing treatment in the hospital.

Herat is among the relatively peaceful provinces in western Afghanistan but the anti-government armed militants have recently increased to their insurgency activities in a number of its remote districts.

The Taliban insurgents and militants belonging to the other militant groups are frequently using magnetic bombs to target the government and security personnel.

At least two incidents of magnetic bombing have been reported in capital Kabul during the past two weeks.a