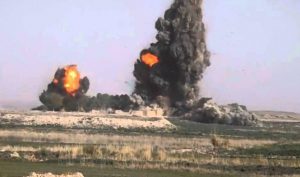 At least three hideouts of the Islamic State of Iraq and Syria (ISIS) terrorist group’s offshoot in Afghanistan, ISIS Khurasan, were destroyed in an airstrike in eastern Nangarhar province of Afghanistan.

The Ministry of Defense (MoD) in a statement said at least four militants of the terror group were also killed in the airstrike.

According to MoD, the airstrike was carried out in the vicinity of Achin district of Nangarhar, one of the main strongholds of the terror group’s loyalists in Afghanistan.

No further details were given regarding the parties involved in the airstrike as both the Afghan Air Force and US forces based in Afghanistan are conducting regular airstrikes against the terror group in Afghanistan.

The US military used the world’s largest bomb, GBU-43 on ISIS-K’s network of caves in Achin district nearly last month which resulted into the deaths of scores of ISIS insurgents, including their senior leaders.