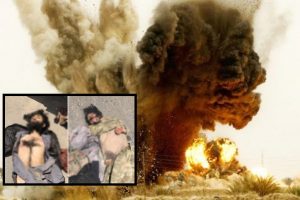 At least twenty eight militants were killed during the airstrikes conducted in southeastern Ghazni province of Afghanistan, the Afghan Military said.

According to the 203rd Thunder Corps of the Afghan Military in the Southeast, at least twenty eight militants were killed during the airstrikes conducted in the vicinity of Moqor and Gilan districts.

The 203rd Thunder Corps in a statement said at least eight militants also sustained injuries during the airstrikes.

The airstrikes were carried out in Pardal, Asghar, and Jahangir area of Gilan district, the statement said, adding that three vehicles including a Ranger type vehicle previously captured by the militants were also destroyed.

The statement also added that the Explosives Ordnance Disposal team of the Afghan military also discovered ad two improvised explosives devices from Qazi Qala area in the provincial capital of the province.

The Taliban militants launched a coordinated attack on Ghazni city earlier this month, sparking heavy clashes that lasted for several days before the militants were driven out of the city.