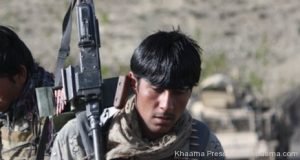 According to local authorities in Daykundi province of Afghanistan, at least 26 Taliban militants were killed and 34 others were injured following clashes with the Afghan security forces.

The militants were killed during military operation conducted by Afghan police and Afghan army to retake the control of a former ISAF military base which was seized by Taliban militants.

Provincial governor, Abdul Haq Shafiq said the military base located in Kajran and Baghran market was seized by Taliban militants five days, and Afghan security forces took the control of the military base on Thursday morning.

Mr. Shafiq further added that the local residents also assisted the Afghan security forces to fight the Taliban militants, and the area has been cleared from the militants presence.