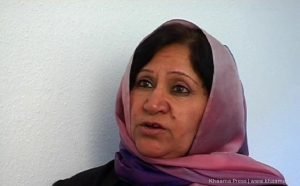 Around four hundred cases of rape and honor-killing have been filed with the Afghanistan Independent Human Rights Comission (AIHRC) during the past two years.

AIHRC officials called the latest statistics as “shocking” and expressed concerns that majority of similar cases have not been recorded due to strict traditional sensitivities.

Suraya Sobhrang, head of the womens’ affairs department in Afghanistan Independent Human Rights Commission said around 240 cases of honor-killing and 160 cases of rape have been recorded across the country last year.

Ms. Sobhrang said the statistic does not include overall violence cases across the country and majority of them are hidden by victims families.

According to AIHRC findings around 21 percent of honor-killings were committed by husbands of the victims, 7 percent of the honor killing were done by brothers of victims, 4 percent by fathers, while brother of the husband, mother and other relatives forms the remaining percentage of 57 percent who committed honor killings across the country.

While the remaining 43 percent of those who were involved behind the honor killing remains unknown.

In the meantime AIHRC said that the latest finding shows that 65 percent of the rape cases were committed by unknown individuals, while close relatives were involved in 35 percent of rape cases which includes 4 percent by fathers, 2 percent by brothers, 1 percent by uncles and 10 percent by neighbors of the victims.

The findings also shows that 15 percent of honor killing and rape were committed by Afghan police officers. AIHRC also stated that judiciary institutions blame rape victims for the crime and convict them for punishment.