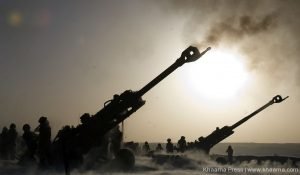 According to local authorities in eastern Kunar province of Afghanistan, at least 21 mortar shells landed in two separate districts in the latest wave of cross-border shelling from Pakistani soil.

Mr. Syed Kheli further added that no casualties and damages to the local residents were reported following the shelling.

Pakistani military has been shelling eastern provinces of Afghanistan including Kunar and Nuristan during the past one year.

An Afghan border guard was killed and three Pakistani military forces were injured after Afghan and Pakistani troops exchanged fire in Goshta district.

According to local residents, dozens of people have been killed or injured following the cross-border shelling by Pakistani military during the recent years.

However, Pakistani officials have continuously denied the allegations, claiming that Pakistani forces were responding to cross-border incursion from the Afghan side.