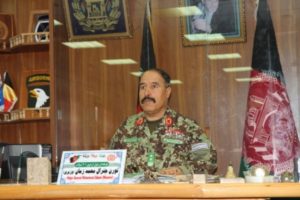 He said that the main objective of this operation is to clear Hisarak District from militants who come here from Pakistan and then dispatch to Kabul.

“In the last 14 years, there have been no operations in this area … this is the first time for joint operations here. Our main objective is Hisarak, it is a strategic district. The enemies in the area come from Pakistan into Hisarak, from here they deploy into Kabul.”

Maj. Gen. Waziri further said that once Hisarak is cleared they will discuss the future security plan of this district with local tribal leaders.

“The plan is once the area of Hisarak is cleared we’ll organize another tribal leader meeting, and talk about the peace for the future in the area,” he said.

Operation ‘Iron Triangle’ started about two weeks before and aims at clearing the target areas from insurgents in one month period.