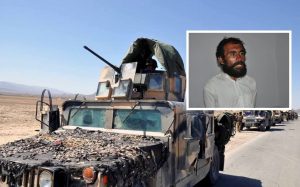 At least eight militants were killed and a suspected Pakistani militant was arrested during the operations of the Afghan National Defense and Security Forces in southeastern Paktia province.

The 203rd Thunder Corps of the Afghan Military in a statement said the Afghan armed forces conducted operations based on intelligence tip in Zurmat district, leaving at least eight militants dead.

The statement further added that at least twelve militants also sustained injuries during the same operations and a suspected Pakistani militant was arrested.

The detained Pakistani militant has been identified as Mirza Khan son of Sardar Khan who is originally a resident of Balochistan province, Thunder Corps added

The counter-terrorism operations are still being conducted in Zurmat district of Paktia and is led by Thunder Corps commander Rohullah Khalil Oghlo, Thunder Corps said.

Paktia has been among the relatively calm provinces in southeastern parts of the country but the security situation has deteriorated in some parts of the province during the recent years.

The Afghan forces are busy conducting counter-terrorism operations in Paktia and other provinces in southeastern parts of Afghanistan.