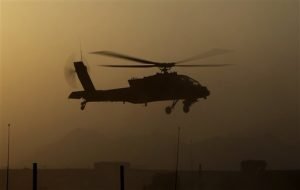 At least 20 militants were killed in a series of airstrikes conducted in southern Uruzgan province of Afghanistan.

According to the local security officials, the militants were targeted in the vicinity of Tarinkot city, the provincial capital of Uruzgan.

Provincial governor’s spokesman Dost Mohammad Nayab confirmed that several airstrikes were carried out against the militants in this province.

Nayab further added that the militants were targeted in strikes conducted both by the Afghan forces and the foreign based in the country.

He said at least 20 militants were killed during the airstrike conducted recently in Tarinkot.

According to Nayab, the airstrikes are being carried out as part of clearance operations against the militants which were launched few days ago.

Nayab says at least 43 militants have been killed or wounded since the operation was launched a few days ago.

Uruzgan is among the relatively volatile provinces in southern Afghanistan where the Taliban insurgents and militants belonging to the insurgent groups are actively operating in its various districts.

According to the local officials, the militants have intensified attacks in this province during the past six months and have conducted numerous attacks on government compounds and security posts.