20 militants killed in Afghan and US forces airstrikes in Helmand 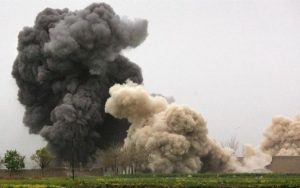 At least twenty insurgents were killed during the airstrikes conducted by the Afghan and US forces in southern Helmand province of Afghanistan, the local officials said late Friday.

The airstrikes were carried out late on Thursday in the vicinity of Marjah district of the Helmand, the officials added.

According to the officials, the airstrikes were carried out on Taliban’s hideouts in Wakil Wazir roundabout.

In the meantime, the provincial government in a statement said additional forces have been deployed to Marjah district in a bid to further step up counter-terrorism operations against the militant groups.

The statement further added that the Afghan forces have also received enough logistics support so that they can take their fight against the insurgents forward.

Taliban insurgents have carried out numerous large attacks to capture the key districts of Helmand including the provincial capital of Lashkargah city during the recent months but the local officials are saying that majority of the attacks were repulsed by the security forces.

Earlier, the officials were saying that the increased attacks by the Taliban insurgents were aimed at seizing full control of Helmand so that they can shift their main leadership council to this province.