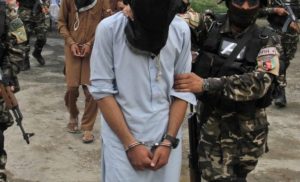 The Afghan security forces have arrested two Pakistani nationals belonging to Lashkar-e-Islam as they arrived in eastern Nangarhar province of Afghanistan.

The provincial police commandment said the two suspects were arrested during an operation in Achin district where the loyalists of ISIS terrorist group and other insurgents are openly operating.

The two suspects have been identified as Jan Mohammad and Jinad and are originally ressidents of Khyber Agency in Pakistan.

According to Nangarhar police, the two suspects had visited Afghanistan to conduct insurgency activities.

Nangarhar is among the relatively peaceful provinces in eastern Afghanistan but the anti-government armed militant groups have recently increased insurgency activities in some remote districts of the province.

The loyalists of ISIS terrorist group attempted to establish a regional operational base in this province, prompting the Afghan and US forces to step up counter-terrorism operations.

Both the Afghan and US forces conduct regular operations and airstrikes to eliminate the militants operating in this province.