2 of the 31 abducted Hazaras found dead in Zabul 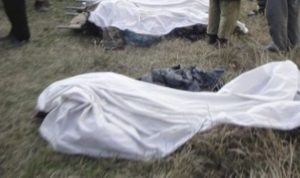 At least two of the 31 abducted Hazaras were found dead in southern Zabul province of Afghanistan, local officials said Monday.

The provincial council chief Ata Mohammad Haqbin said the dead bodies of the two men were found in Khak-e-Afghan district.

Haqbin further added that one of the hostages was murdered while the second one who was an old man had apparently died due to weakness.

The 31 members of the minority Shiite Hazara community were abducted on Feb. 24 in southern Zabul province of Afghanistan from two vehicles on a major road.

He said the hostages are still alive and are being held in different areas by the militants who have slip them up into three or four groups.