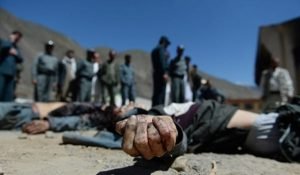 Two suicide bombers of the Islamic State of Iraq and Syria (ISIS) terrorist group were blown up by their suicide bombing vests before they manage to target the Afghan security forces.

A statement by the police commandment said the two suicide bombers were looking to get close to the Afghan security forces and detonate their suicide vests but were instantly killed after their explosives went off prematurely.

The loyalists of the terror group have not commented regarding the incident so far.

The Hamza operations were launched nearly one month ago in response to the growing threats posed by ISIS loyalists in Nangarhar province.

The US forces in Afghanistan dropped the largest non-nuclear bomb on ISIS hideouts in Achin district last month that resulted into the elimination of the largest tunnels network of the terror group besides leaving nearly 100 ISIS militants dead, including some of their senior leaders.