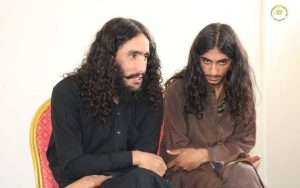 Two militants affiliated with the Islamic State of Iraq and Syria Khurasan (ISIS-K) surrendered to the Afghan forces in eastern Nangarhar province of Afghanistan.

The provincial government media office in a statement said the militants were operating in the leadership ranks of the ISIS terrorist group in Nangarhar.

One of the militants, Naqibullah, said they joined the ISIS ranks four years ago together with a group of Pakistani Taliban militants led by Hafiz Saeed, admitting that they have been involved in anti-government armed activities and killing of the civilians.

Naqib further added that he contacted the Afghan intelligence after realizing that all their activities have resulted in the loss of the ordinary civilians.

He said the ISIS group was paying their salaries and other required materials and the weapons and munitions were also coming from the other side of the Durand Line.

According to Naqib, militants hailing from Tajikistan, Uzbekistan, Azerbaijan, Chechnya, Pakistan, Saudi Arabia, Turkmenistan, and some other countries are also fighting in ISIS ranks in Afghanistan

Another member of the group, Sajad, who surrendered to the Afghan intelligence, said their family members, including the wife and two children Naqibullah and his wife along with his son, are also accompanying them.

Provincial governor’s spokesman Ataullah Khogyani said the surrendered militants hail from Orakzai Agency of Pakistan and previously had links with the leadership of the terror group.

Khogyani further added that the two militants have resided in Nangarhar for four years before surrendering to the intelligence forces.

According to Khogyani, the surrendered militants have also brought their family with them and handed over two weapons to the security forces.