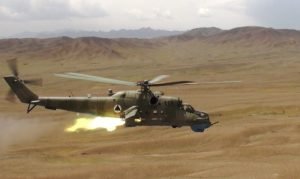 22 militants have been killed in the newest airstrikes conducted by Afghan Air Force in eastern and southern parts of Afghanistan.

A statement released by the Ministry of Defense states that based on the coordinates provided by the 201st Selab Military Corps in the country’s east, Afghan Air Force targeted positions of Daesh militants in Achin District of Nangarhar province leaving 18 militants killed.

The airstrikes were carried out by helicopters equipped with MD-530 and MI-17.

Defense Ministry statement further states that the vehicle was completely destroyed in the airstrike carried out in Yakhchal area.

Although, the statement does not specify group-ties of the militants killed but Afghan forces are engaged in heavy clashes with Taliban in Gerishk District.