16 ISIS militants killed in separate airstrikes in East of Afghanistan 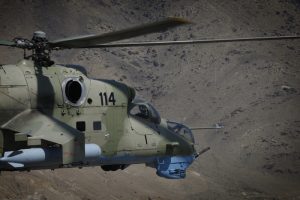 At least 16 loyalists of the Islamic State of Iraq and Syria (ISIS) terrorist group were killed in separate airstrikes in eastern Nangarhar province.

The Ministry of Defense (MoD) said the airstrikes were carried out in Kot and Achin districts where the loyalists of the terror group are actively operating.

MoD further added that a vehicle belonging to ISIS terrorists was also destroyed along with a PK heavy machine gun.

The Afghan forces are still engaged in clearance operations in Kot and a number of districts of Nangarhar after ISIS loyalists launched a major attack police check posts in Nangarhar last Friday.

The attack was one of the major one since the group has launched its opereations in Afghanistan and despite they received major setbacks during the recent months.

The National Security Adviser Mohammad Hanif Atmar was forced to visit Nangarhar to meet with the local officials following the attack.

At least 131 ISIS loyalists were killed and several security personnel and civilians lost their lives during the first two days of the clashes sparked by the coordinated ISIS attack.