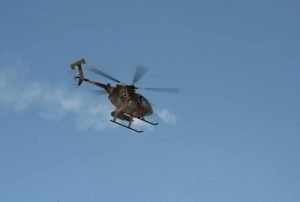 At least sixteen loyalists of the Islamic State of Iraq and Syria (ISIS) terrorist group were killed in eastern Nangarahr province of Afghanistan.

The provincial police commandment in a statement said the militants were killed in the past 24 hours in Haska Mina and Kot districts.

The operations were conducted jointly by the Afghan National Defense and Security Forces (ANDSF) with the close-air support.

At least two ISIS loyalists were also wounded during the operations, the statement said, adding that five hideouts of the terror group were destroyed and at least 9 suspects were arrested.

According to the police commandment, five of the militants were killed and two others were wounded in Haska Mina district.

The remaining militants were killed in Kot district and all those killed or wounded were foreigners, the statement added.

Nangarahr is among the relatively calm provinces in eastern Afghanistan but the anti-government armed militant groups are actively operating in some of its remote districts.

This comes as the Afghan security forces launched a clearance operation against ISIS loyalist earlier this week with the local officials saying the operations are being conducted with the support of the US forces who are providing air support to the ground forces.