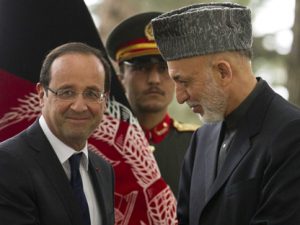 French President Francois Hollande for the first time provided details of his plan to pull France’s combat troops out of Afghanistan by the end of the year, saying Friday he would leave around 1,400 soldiers behind to help with training and logistics.

President Francois Hollande of France made a surprise visit to French troops in Kapisa Province on Friday, assuring them that their mission in Afghanistan would be over this year.

He explained his decision to recall French combat troops by the end of 2012, a year earlier than Paris initially planned, and two years before NATO allies.

“It’s a sovereign decision. Only France can decide what France does,” he told soldiers at Nijrab Base in eastern province Kapisa, where most of France’s 3,550 troops in the country are based.

At a news conference here with President Hamid Karzai of Afghanistan, Hollande said that while French combat forces would leave this year, French advisers and trainers would remain in the country to help the Afghan defense and interior ministries. In addition, he said, French nonmilitary aid will be increased, although he did not give specifics.

France has lost 83 soldiers in Afghanistan. It provides the fifth largest contingent to NATO’s 130,000-strong US-led force, but allies have downplayed the effect of their early departure, saying Afghan troops are ready to take over.