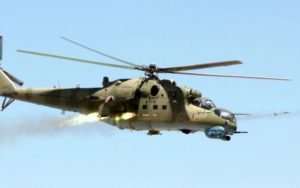 At least 14 anti-government armed militants were killed in separate airstrike conducted by the Afghan Air Force in northern and southeastern parts of the country, the Ministry of Defense (MoD) said Wednesday.

At least 7 of the militants were killed during airstrikes in northern Kunduz province targeting militants in Hakim Bai and Bagh Sherkat villages, MoD said.

The Ministry further added that 7 more were killed in separate airstrike conducted in Zurmat district of Paktika province.

According to MoD, at least three Taliban militants were also wounded in the raids.

Both Kunduz and Paktika provinces are among the relatively volatile provinces where the Taliban insurgents and militants belonging to other militant groups are actively operating in a number of its districts.

The insurgents belonging to the notorious Haqqani terrorist network are active in some districts of Paktika province.

The latest airstrikes came as the Afghan National Defense and Security Forces (ANDSF) have launched new operations to counter the threats posed by the militant groups.

The new operations were launched amid ongoing annual offensive of the Afghan forces being conducted under the name of ‘Shafaq’ to eliminate the top leaders of the militants.