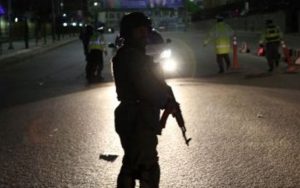 The security officials in Kabul put the casualties toll in Kabul suicide attack at 13 dead and 18 wounded, including civilians and police personnel.

The deputy spokesperson for the ministry of interior Nasrat Rahimi told reporters in Kabul today that 13 policemen lost their lives in the attack.

He said at least 16 policemen and 2 civilians were also wounded after a suicide bomber detonated his explosives among the police personnel and civilians.

The head of the Criminal Investigation Department Salim Ehsas said the security forces have closed 24 shops selling drugs in the area.

However, he said the security forces fierce resistance from certain residents of the area during the operations.

This comes as the local residents and eyewitnesses in the area had earlier said that the suicide attack took place at the end of a demonstration in the area.

The blast took place late on Thursday night in Bani Esar area of the city located in the 9th police district of the city.

Security sources in the area had earlier said that 20 people have been killed and more than 20 others have sustained injuries in the attack.

According to reports, the Islamic State of Iraq and Syria (ISIS) loyalists have claimed responsibility behind the attack.