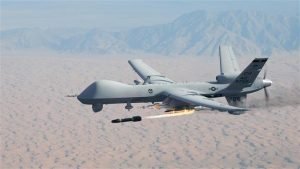 At least twelve loyalists of the Islamic State of Iraq and Syria (ISIS) terrorist group were killed in a drone strike in eastern Nangarhar province of Afghanistan.

The provincial police commandment official said the airstrike was carried out by the foreign forces in Achin district late on Monday.

The officials further added that the militants were targeted in Bandar area as they were travelling in a vehicle which was also destroyed in the airstrike.

According to the local officials, the militants killed in the airstrike are all foreign nationals.

The security forces or local residents did not suffer any casualties in the airstrike, the local officials added.