10,000 Kalashnikovs expected to arrive in Kabul from Russia next month 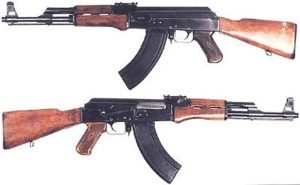 The Russian Federation has promised 10,000 Kalashnikovs AK-47 to Kabul for supporting Afghan forces in their fight against terrorism.

Fazal Hadi Muslimyar, speaker of Meshrano Jirga (Upper House of the Parliament) has said that the weapons are expected to arrive in Kabul in next 20 days.

“Luckily, I would say Russia’s eagerness towards Afghanistan was higher than before. 10,000 Kalashnikovs have been approved which would be handed over to the interior ministry after arriving in Kabul in next 20 days,” Muslimyar told Radio Free Europe (Azadi Radio).

He said that Russian officials have rejected rumors of directly fighting Daesh in Afghanistan, adding that they will extend assistance to Afghan government for eliminating any opponent armed group.

Moscow has assured of staying with Kabul in its fight against terrorism which not only threatens Afghanistan but the entire region.

Kabul is in contact with Moscow for receiving more weapons and gunship helicopters.