100 couples marry in a mass wedding in Daikundi province 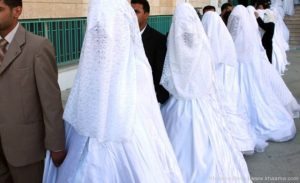 A mass wedding was organized in central Daikundi province of Afghanistan two days after 31 couples tied the knot in capital Kabul in a similar wedding ceremony. (File Photo)

Around 100 couples got married in the mass wedding in Neli, the centrl city of Daikundi province on Monday.

Rezaye further added that the youths belong to various districts of Daikundi who were unable to finance their wedding ceremony.

In the meantime, a religious cleric in Daikundi has said the mass weddings are against the principles of Islam and should be immediately stopped.

This comes as Khairkhwah Foundation organized a mass wedding in capital Kabul on Thursday to help the engaged individuals who were unable to bear the wedding expenses due to weak economy.

An official from Khairkhwah Foundation, Abdul Rahim Rashid said they are expecting that similar wedding ceremonies are organized with the cooperation of businessmen and wealthy individuals to assist the youths who are unable to pay for their wedding ceremony.

The foundation also vowed that employment opportunities will also be provided for the youths who tied the knot today.