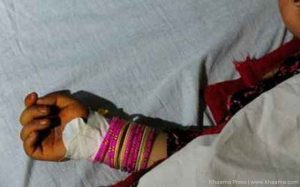 A 10-year-old Afghan girl who was raped by a mullah in northern Afghanistan is at the risk of honor killing.

According to reports, the family of the young rape victim is under the pressure by village elders, who are insisting to kill the girl because “she had brought shame to them.”

The girl was reportedly protected in a women’s shelter in Kunduz province but was returned to her family on Tuesday.

According to an official indictment, the rape was so brutal and had nearly died because treatment as delayed.

She had suffered a break in the wall between the vagina and rectum, the New York Times reported.

In the meantime, the 45-year-old Mullah has claimed that the girl had promised to marry him and rejected that she is 10-year-old.

The mullah has claimed that the girl was 17-year-old, but the mother of the victim has said she was only 10-year-old.

Hospital records indicate the child weighed just 40 pounds and had yet to start menstruating.