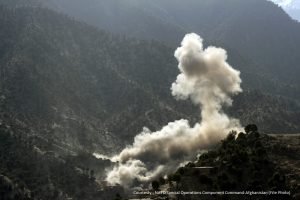 At least ten militants were killed or wounded during an airstrike conducted by the U.S. forces in southeastern Paktia province of Afghanistan.

The 203rd Thunder Corps of the Afghan Military in the Southeast said Thursday that the latest airstrike was carried out in the vicinity of Syed Karam district.

According to a statement released by the Thunder Corps, the coalition forces targeted the militants in the vicinity of Kohsin area of the district.

The statement further added that four militants were killed and six others were wounded during the airstrike.

Paktia has been among the relatively calm provinces but the security situation of the province has started to deteriorate during the recent years as reports often emerge of the militants activities including coordinated attacks on security forces.

This comes as at least three militants were killed and three others were wounded during a similar airstrike near Zurmat district on Sunday.