10 ISIS militants killed, wounded during the operations in Kunar province 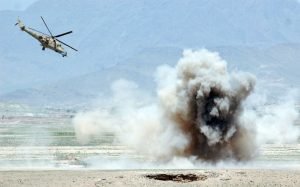 At least ten militants affiliated with the Islamic State of Iraq and Syria Khurasan (ISIS-K) were killed or wounded during the operations in eastern Kunar province of Afghanistan.

The 201st Silab Corps of the Afghan Military in the East said the militants were killed during the airstrikes and ground operations conducted in Suki district.

According to a statement released by 201st Silab Corps, the operations were jointly conducted by Afghan army, Afghan police, Afghan intelligence, andd public order police forces with the support of the Air Forces.

The statement further added that 7 militants were killed and three others were wounded during the same operations conducted.

The operations were conducted as part of the Silab-2 (8) operations to eliminate the terrorist groups and pave the way for the elections, the 201st Silab Corps added.

The 201st Silab Corps also added that some villages have been cleared from the militants and the security personnel and local residents have not suffered any casualty.