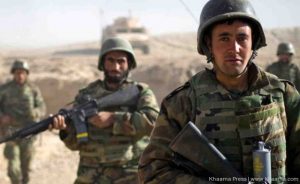 Gen. Azimi did not disclose further information regarding the exact locations of the incident.

The Taliban militants group and other insurgents frequently use improvised explosive deivce (IED) as the weapon of their choice to target Afghan and coalition security forces.

There have been a considerable increase in Afghan forces casualties after taking security lead across the country from the coalition security forces.