1 US soldier killed, 2 wounded in apparent insider attack in Afghanistan 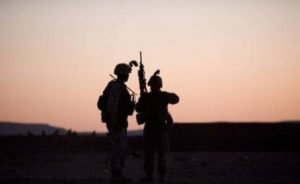 One US soldier was killed and at least two others sustained injuries in an apparent insider attack in South of Afghanistan.

The statement further added that the wounded service members, who are in stable condition, are currently being treated.

No further details have been given regarding the incident and exact location where the attack took place but NATO said the incident is under investigation.

In the meantime, Afghan officials have told AFP that the incident has taken place in southern Uruzgan province of Afghanistan.

The Taliban group issued a statement claiming that the attack was carried out by the Afghan soldiers and as a result four American soldiers were killed and a number of others have sustained injuries.

Uruzgan is among the relatively volatile provinces in South of Afghanistan where the anti-government armed militant groups are actively operating in some of its districts and often carry out terrorist related activities.